Abundant nature including greenery, waterside spaces, and beautiful terrain has a calming effect on people. Even in the city center with its buildings, infrastructure and other manmade structures, a rich nature adds color and energy to everyday life. And it not only speaks to people’s sensitivities, but also has good impacts on the surrounding living organisms and can also serve a role in curbing the heat island effect and mitigating disasters, among other issues.

The necessity of building new urban infrastructure has been decreasing as of late with the shrinking population. To that end, contrary to the sense of values of the era of high growth when the economy was top priority, a new sense of values that meets the needs of today’s age, namely, an urban space where each individual can enjoy their lives while in the city, is now necessary. It could be said that these factors are also behind the movement to create greenery in the city.

Shin-Daibiru Building and the Forest of Dojima: Recreating the beloved rooftop woods on the ground level

The Shin-Daibiru Building and the Forest of Dojima is an innovative project that created a huge 3,300 square meter forest in Osaka’s Dojima, an area with little greenery. Along with the reconstruction of the building, about half of the site was greened to create an “urban oasis,” a thick woodland with 300 trees of some 80 species, at the base of a high-rise building. 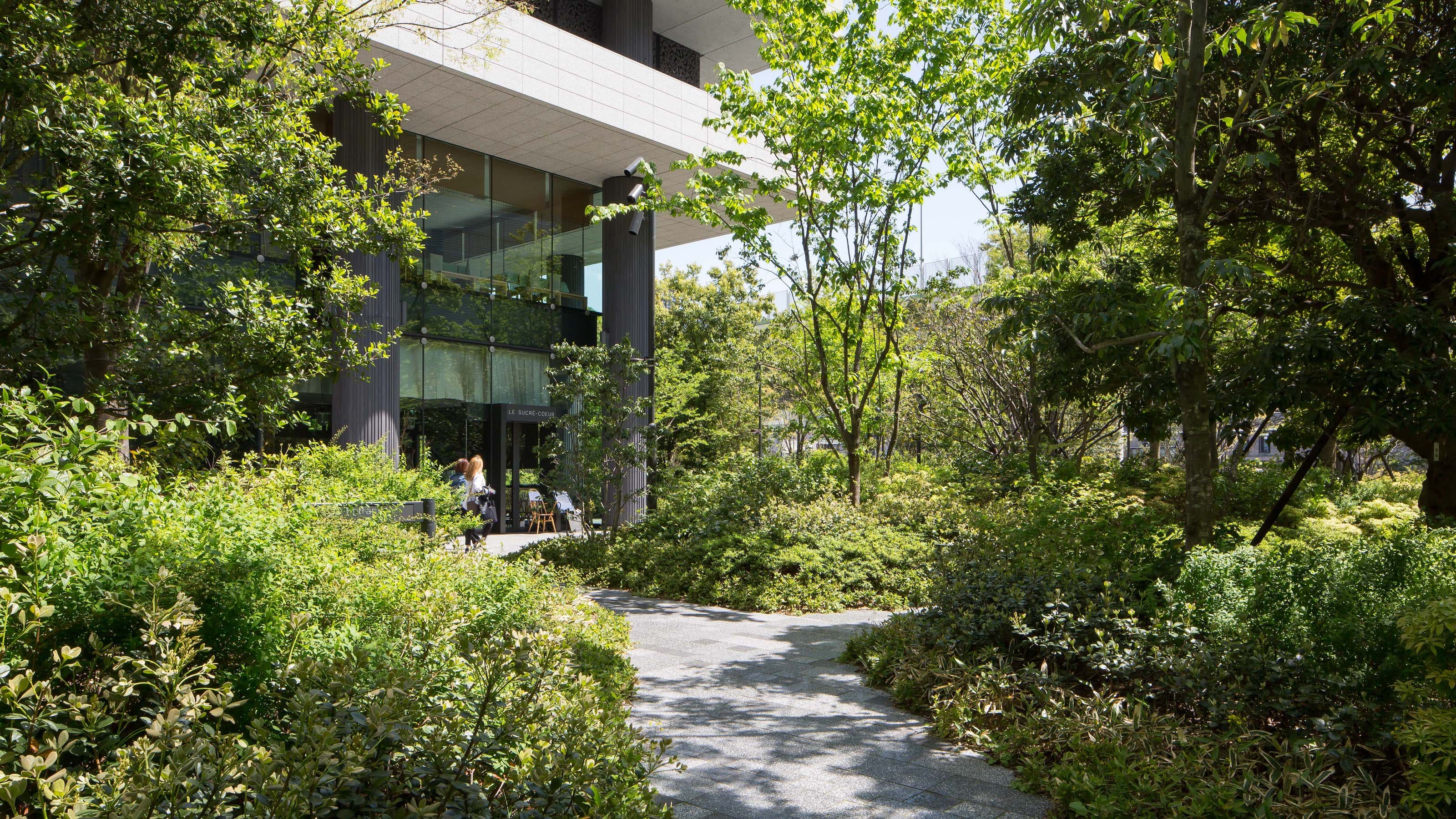 A characteristic feature of the old building was the expansive green space on the roof. Completed in 1964, it was a forerunner at a time when there were not that many cases of greened rooftops, providing an expansive garden known by those in the know, and an ecosystem that was maintained for half a century.
Nikken Sekkei, which was charged with the landscape design when the old building was reconstructed, engaged in deep discussions with the client. As a result, they arrived at the common recognition that to maintain the greenery with trees that have been raised on the rooftop for over 50 years, to carry on the thoughts of those who built and looked after this rooftop forest, and to continue providing the community with a place of relaxation that will be loved by them are “extremely important in conveying the spirit of affection for the community.”

The process leading to the success of transplanting the rooftop greenery

A large feature of the new green space is that some of the trees on the old building were relocated there. But many difficulties were faced on making this a reality. Studies were first conducted on the rooftop forest. Some 20 trees including the zelkova trees that had grown to the height of 12 meters, Japanese maple, camellia, and camphor trees were selected for transplanting.
The problems began with digging around and wrapping the roots to prepare for the transplant. The soil on the rooftop averaged just 36 centimeters deep, so many of the trees grew by spreading their roots to the side, rather than down. Because the root clumps of these trees, which had grown in a very different environment from that of regular trees, were flat, instead of taking regular measures such as wrapping the roots with rope, ingenious measures were needed such as digging up the root clumps after solid reinforcement using stretch film and tube insertion.
Following major conveyance work, such as lowering trees weighing more than 4 tonnes from the roof using a 200-tonne crane, the trees were transplanted at a temporary site.
In order to facilitate the final transplantation with the root system preserved, the trees were planted on mounded earth and cultivated for about four years during the time the building was under reconstruction. During that time as well, the environment was cared for using cultivation technologies such as inserting peat moss wetted with water inside the burlap so that the roots do not dry up. These efforts bore fruit, with these historic trees able to be transplanted around the newly built building with their root systems and volume of greenery sufficiently preserved.

Because of the location of a parking space underground, the greenery of Shin-Daibiru Building and the Forest of Dojima was created on an artificial foundation. Exercising creativity, such as creating an undulating terrain, winding walking paths, and randomly planting trees, removed this sense of artificial ground, making it seem like a natural forest. 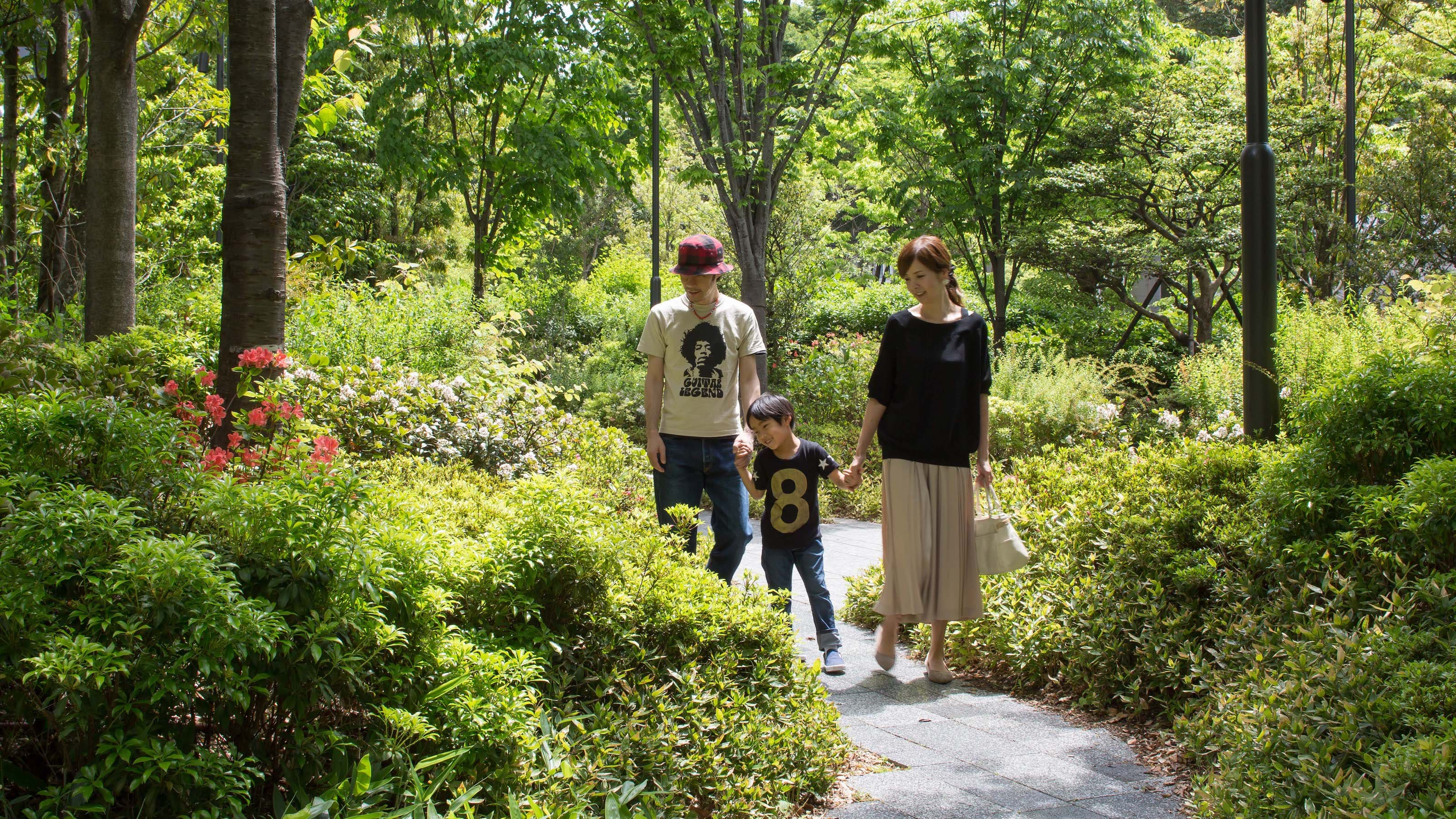 Regular monthly maintenance and uniform pruning are not conducted and excessive measures against pesticides are not taken. The forest is flourishing through adaptive management, which makes the most of the natural state and looks after the plants when and if needed. It has become a space that is comfortable to not just people, but to flora and fauna—a place where you can hear the chirping of birds and where butterflies congregate.

By taking this rooftop greenery—a place of relaxation for those in the know—and recreating its legacy on the ground, it has become the gateway to the building, a space where anyone can casually visit without any time limitations. It is now a place beloved by many people: on weekdays, a place for office workers to unwind, and on weekends and holidays, a place for interaction among the local residents.
As the green space was also designed to be integrated with the glass-walled first floor entrance lobby, the interior has become an open space with a vista of the greenery, where light filtering through the trees can be enjoyed. Events such as classical music concerts are held here at times, making this space also a beloved public space open to the community.

A characteristic of Nikken Sekkei’s landscape design is that architectural and landscaping methodologies are not just simply applied, but each and every feature is designed with careful attention to detail after close investigation of the surrounding environment and context. On this foundation, studies on the feasibility of the plan and simulations up to its realization were conducted. The design even incorporates the perspective of how the space will be managed after completion to provide control over the planting plan which has the element of uncertainty.
Greenery not only has good psychological effects on people, but at times, it generates culture, alleviates environmental problems, and also helps to mitigate disasters. Nikken Sekkei believes that it is important to think about cities from two aspects—not only through the large visions of urban planning, but through the use of the power of landscape design, which can directly appeal to the sensibilities of individuals. Nikken Sekkei will continue to propose landscapes that make the most of the power of nature in order to create better designs in the city center that will benefit people and the surrounding environment.