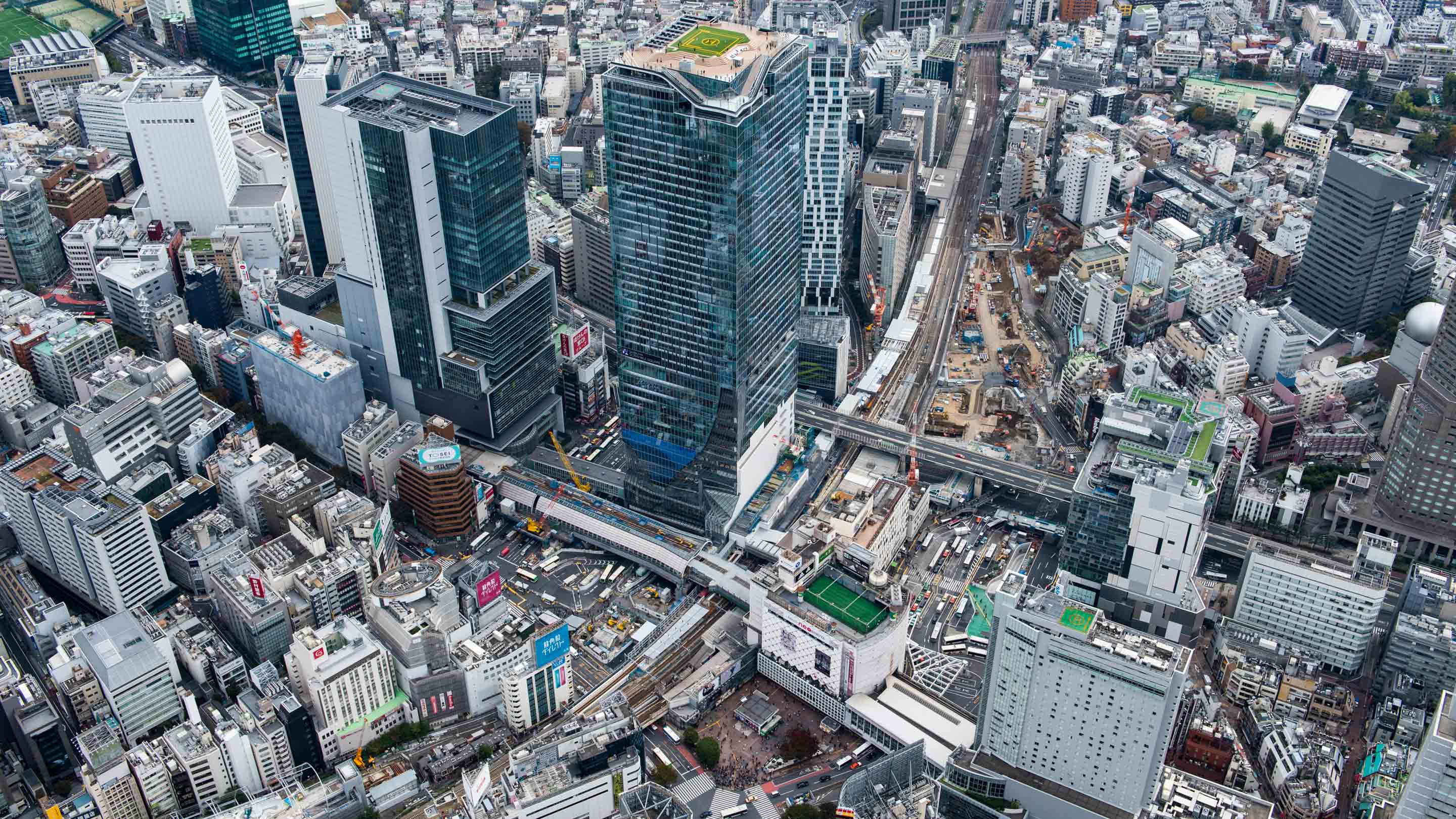 Shibuya Station is a major terminal accommodating the nine railway lines of four companies and as many as some 3.3 million passengers a day. The area around it continues to grow as one of Japan’s most prominent areas—always in sync with the times as a global trendsetter for culture and fashion, with a high concentration of companies involved in, among others, music, fashion, imagery, design and IT.

Shibuya Scramble Square is project aiming to redevelop the station block to guide in the next future of Shibuya. The first phase (East Tower) opened on November 1, 2019. This building is 47 floors above ground and 7 floors below ground, and includes an urban core that smoothly connects multiple public transit spaces; a high-grade office with over 73,000 square meters of floor space; and a commercial facility surpassing 32,000 square meters. In addition, it aims to maximize Shibuya’s potential as a “center open to the world that sets trends for life and culture” by introducing urban functions to heighten global competitiveness, such as SHIBUYA QWS, which encourages the concentration and growth of the creative content industry in Shibuya, and SHIBUYA SKY, the observation desk that attracts visitors from both within Japan and abroad. 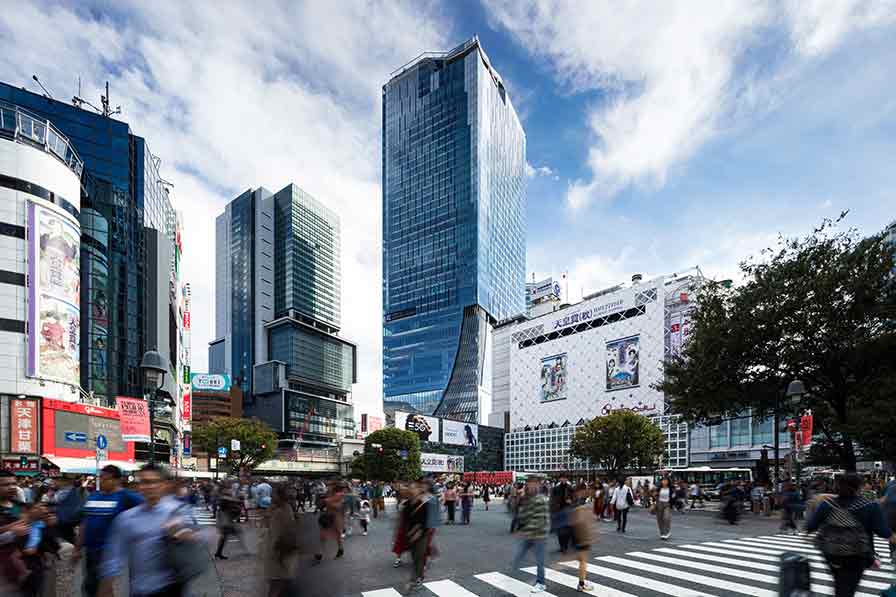 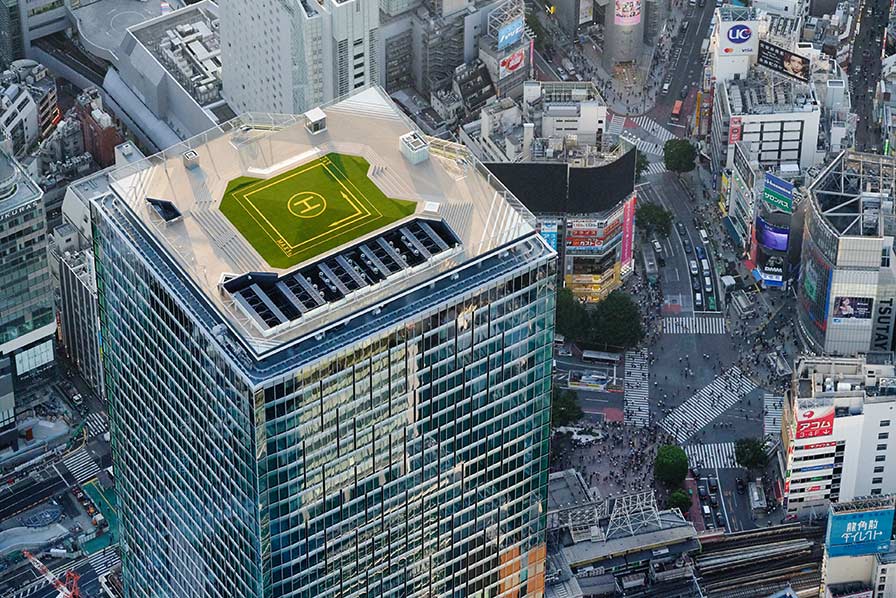 Urban renewal that makes the most of Shibuya’s distinctive character

Shibuya is a town that grew spontaneously under the urban framework that had existed from before World War II. The station facilities had become increasingly complex through repetitive extensions and renovations, and the urban functions were aging. In order to renew the facilities and functions to rebuild the town without destroying its distinctive dynamism, it was imperative to do this in an integrated manner by removing the boundaries between city planning, architecture and infrastructure.

To solve these challenges, grasping the opportunity provided by the decision for mutual direct operations of the Toyoko Line and Fukutoshin Line in 2000, and the Cabinet designation of the area in 2005 as a Priority Development Area for Urban Renaissance, full-scale operations began on the overhaul of Shibuya to rebuild the infrastructure including Shibuya station, while using the site of the former Toyoko line tracks and undertaking the sequential development of five blocks.

After long years of discussion between the government authorities and developers, it was planned to first reorganize urban infrastructure such as the station front squares and river through land readjustment projects, shape and concentrate building sites, and secure plots of land for railways and road widening, and following this, build a pedestrian network that seamlessly connects the station and town through redevelopment that leverages the benefits of the area’s designation as a special zone for urban renewal.

Through such processes, following the completion of Shibuya Hikarie in 2012 and Shibuya Stream in 2018, the third project, Shibuya Scramble Square The First Phase (East Tower) was recently completed. 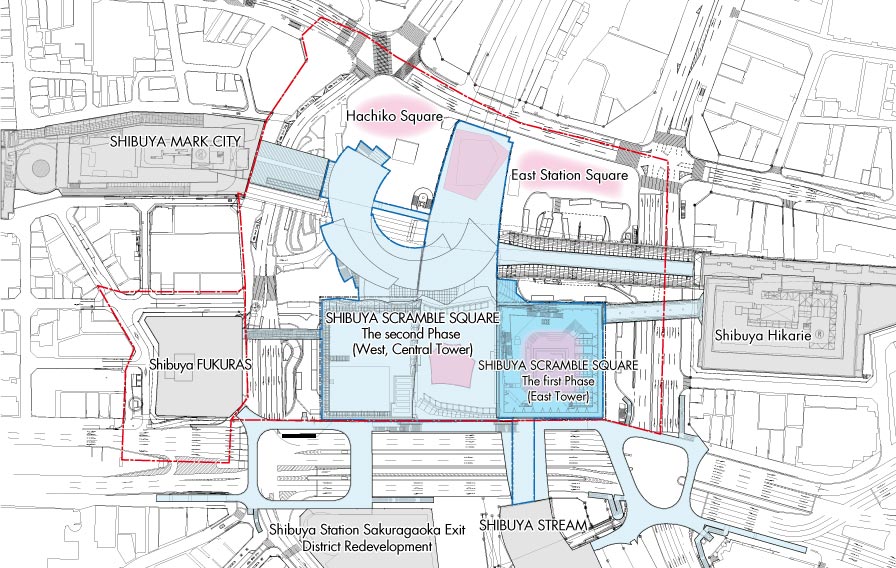 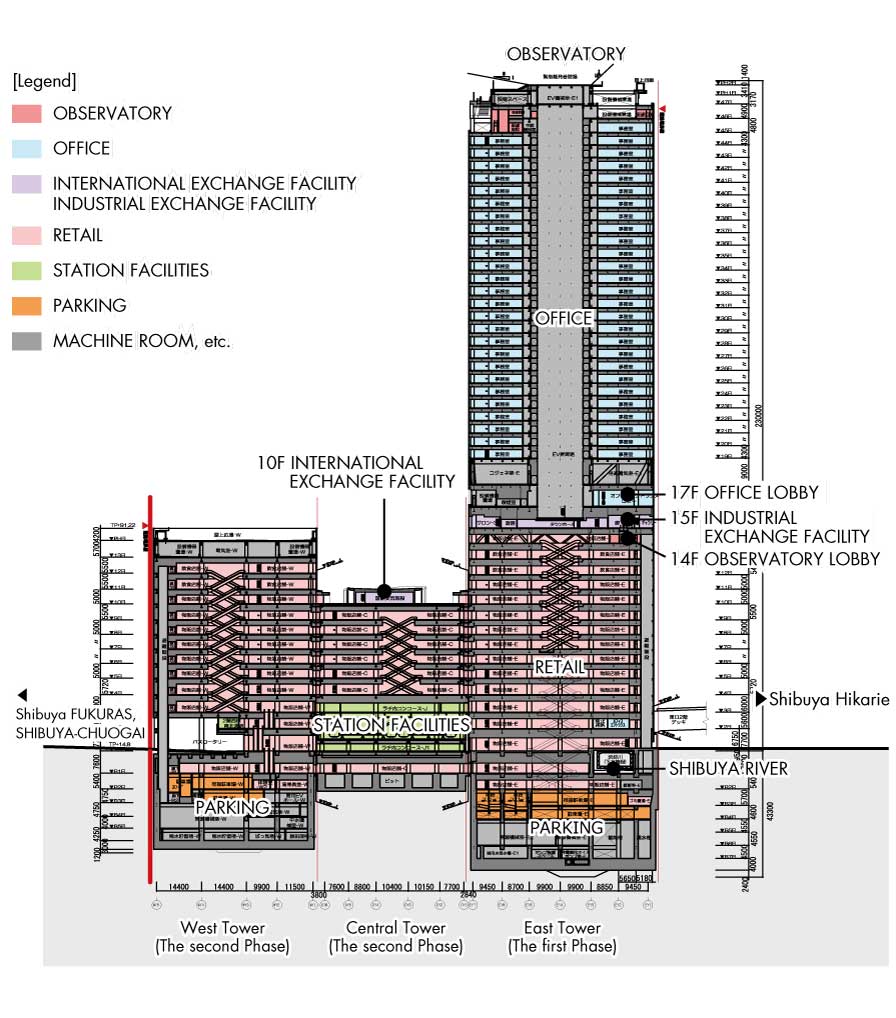 This series of development projects adopted the method of process-led design through discussions held at the Design Council established by Shibuya City, with no prior determination of rules. Designs were born from talks among experts and the designers and architects engaged in the design of the respective blocks. This method born to redesign Shibuya, a spontaneously growing town, could serve as a model to guide the design of cities that will be reaching maturity in the future.

The most distinguishing feature of redevelopment projects in the area around Shibuya station is that each of the projects aim to create new activity by seamlessly linking the station and town by creating city-scale three-dimensional public spaces in this valley town. Symbolizing this three-dimensional public space is the “urban core,” presenting a vertical pedestrian flow line, and the observation facility, “SHIBUYA SKY.” 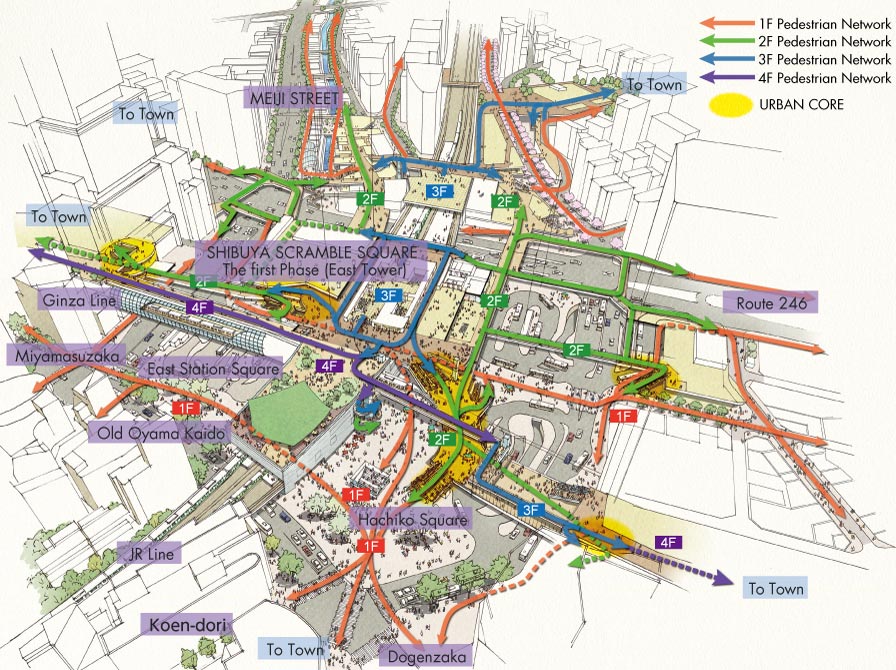 Shibuya Station had a reputation among its users as being too complex and difficult. In order to solve this issue, the first phase of Shibuya Scramble Square (East Tower) involved creating an “urban core” that linked the station from two floors underground to the three floors above ground. This concentrates the space needed for train line transfers and introduces barrier-free design, and also improves access from the station to the town, successfully realizing visitor convenience and comfort. The second phase is scheduled to further create a three-dimensional public space network encircling the Hachiko Square in front of the station.

Composition of the Urban Core

A panorama view of Tokyo from the SHIBUYA SKY observation area

SHIBUYA SKY is located at the highest point in the Shibuya district, about 230 meters aboveground. It is an observation facility made up of two spaces—an outdoor observation area and an indoor observation area—providing a panorama view of Tokyo, from the skyscrapers of Shinjuku and Otemachi, to Tokyo Skytree, Mt. Fuji, and Tokyo Bay.

The outdoor observation space uses the entire roof of the building, which makes it one of Japan’s largest outdoor decks with an area surpassing 2,500 square meters. Standing in the center of the stage, visitors can feel an overwhelming sense of freedom with nothing to block the 360-degree view. Moving to a corner, Shibuya’s famous scramble crossing intersection can be seen far down below, providing an experience of Shibuya’s immense dynamism. And in the 3,000-square-meter indoor observation area, digital content by Rhizomatiks are displayed throughout for a virtual experience overlapping with the real view for a novel vista experience.

By achieving a public space on the rooftop, SHIBUYA SKY, an urban flow from the urban core to SHIBUYA SKY has been created for a high-rise linked to the town. 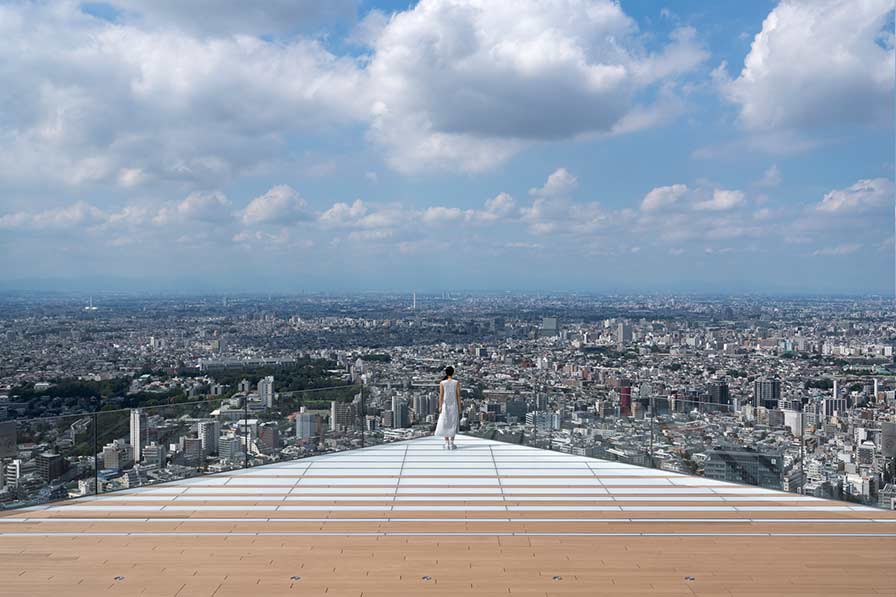 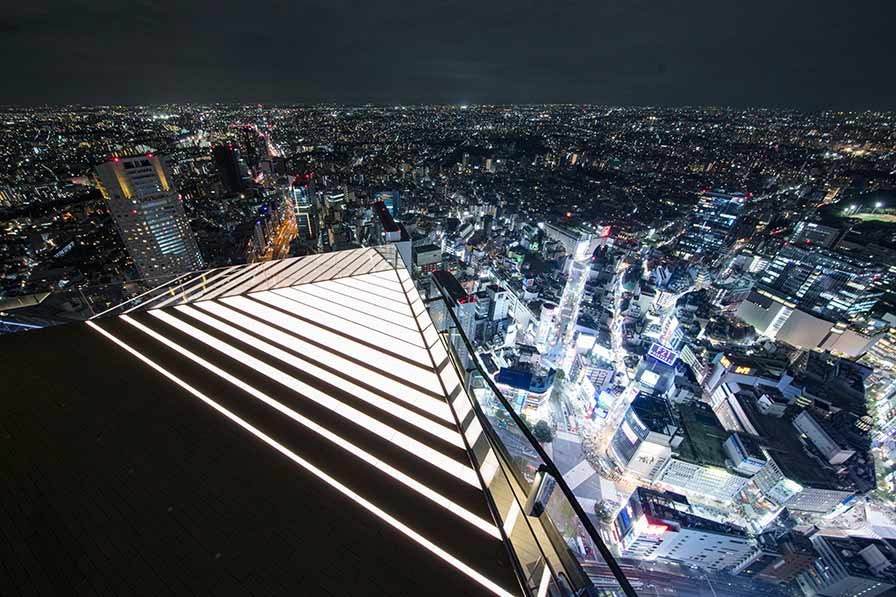 For this building, the three design architects—Kengo Kuma, Kazuyo Sejima and Nikken Sekkei—focused on the flow of people and a place open to the public during their discussions, arriving at a policy to design a truly Shibuya-like high rise with a “hard” tower section that complies with the structure of the neighborhood, and a “soft” base such as the urban core that takes in the flow of the town.

Kengo Kuma was in charge of the lower section. He expressed the features of Shibuya, where various people, things and information flow in and out, as a building with a soft volume that is transformed, distorted, and worn away by this flow. Specifically, at the urban core adjacent to the flow of people in the east station square and the human flow in the subways, the volume was pared down, and through gradational placement of aluminum fins and the spraying of ceramic powder on the glass exterior, a curtain wall that presents a novel expression of shadow and movement within translucence was created.

Next, the tower section designed by Nikken Sekkei focused on the topography and the city scale of Shibuya with its rows of small, mid-rise buildings. Vertical slits for natural ventilation and air conditioning air intake and exhaust were randomly placed to sectionalize the huge glass façade to create a “exterior design that matches the town’s sense of scale.”
The tower’s design also took note of the building’s relationship with Shibuya’s streets. Shibuya has streets extending out radially from the station at the bottom of a valley. From its location, the building meets up with these radially spreading streets at its corner, and this is the reason for “an exterior design that converges in the corner.” The white ceramic print on the exterior glass gradually becomes translucent as it approaches the corner. This gives movement to the shape of the corner and adds changes to the reflection of light at the corner. This exterior design that converges at the corner is seamlessly linked with the urban core design of the lower floors and is tied to the design of the rooftop observation area, SHIBUYA SKY, which opens out to the city, and adds dimension to the town of Shibuya.

The energy of the horizontally spreading town of Shibuya is joined with the vertically soaring high rise. It was aimed to make this a tower linked to the town, which takes in the energy of Shibuya and generates new possibilities. 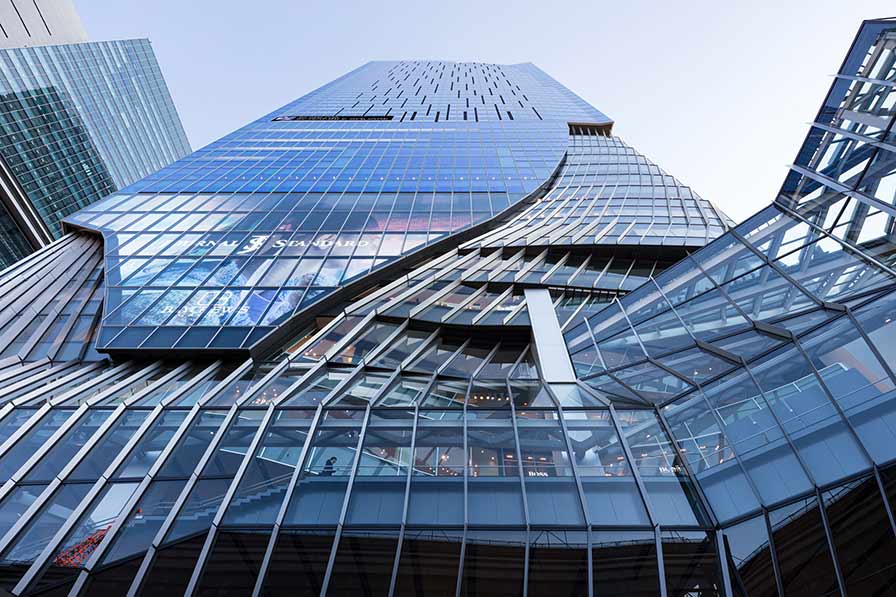 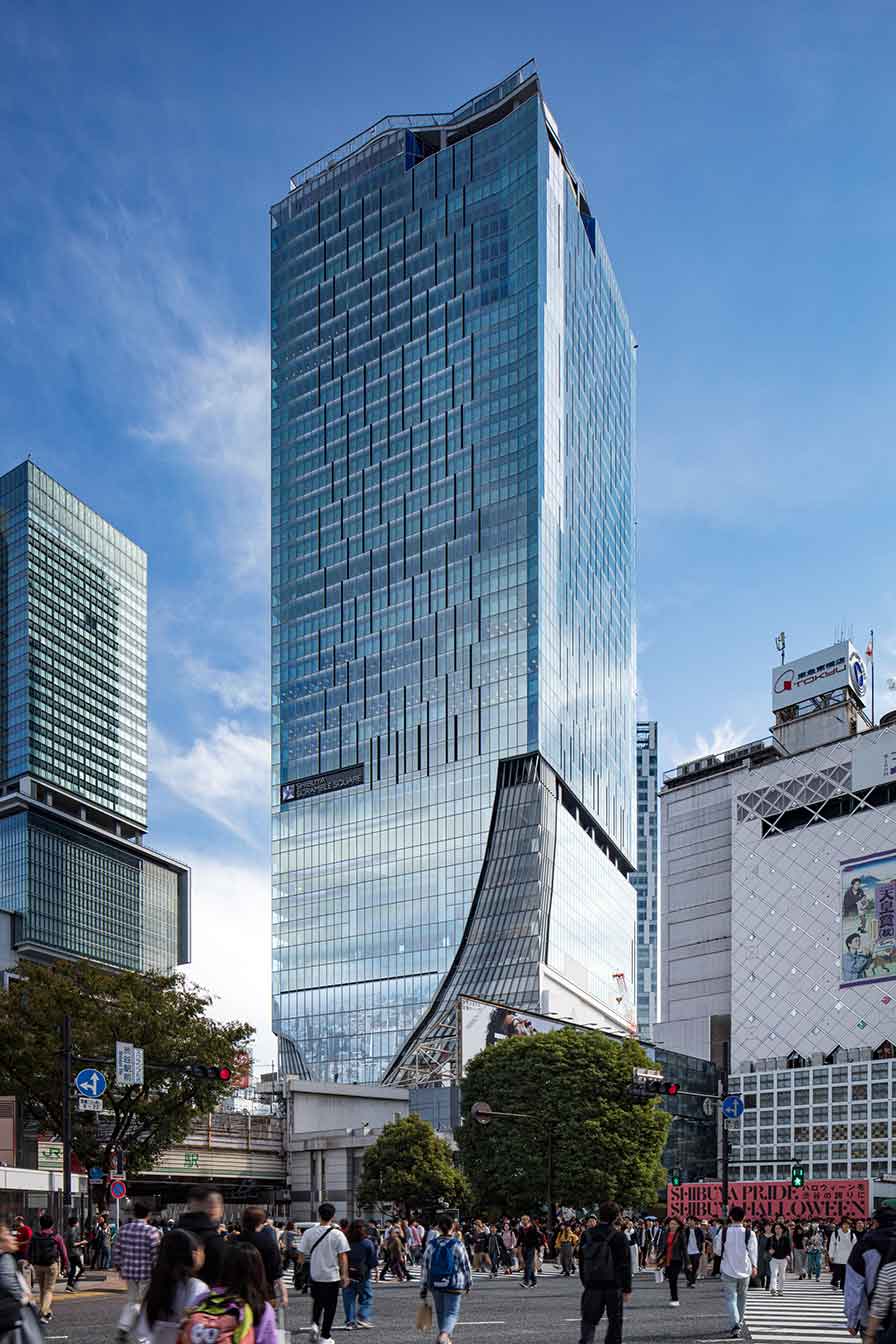 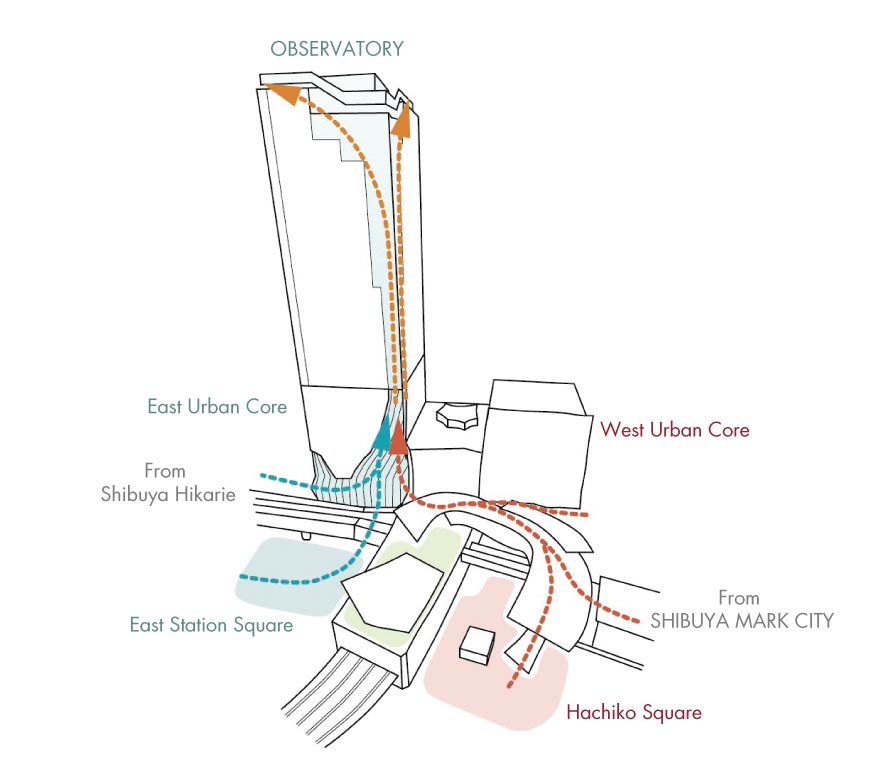