In an unprecedented win for Nikken Sekkei, Shenzhen Metro Group announced in May that a Nikken joint venture has been selected as the winner of China’s largest transportation hub architectural competition.

Eliminating the boundaries between the railway station and the city with “TOD 4.0”

Shenzhen Xili is the first “TOD 4.0” project in China that proposes the concept of “integrating station, city, people, and nature.” Innovations include eliminating the boundaries between the railway station and the city, giving the station a new face, and working urban activities, functions, and the natural environment comprehensively into the station design.

At Nikken Sekkei, we condense our prior experiences and carefully incorporate them into the planning of each individual project. For Shenzhen Xili, these were adapted to actual conditions in China, from planning transit space circulation to urban level connections. We have further enhanced the integration and connectivity of the station and the city under the concept of “Ribbon City”, exceeding conventional development methods.

A new TOD is beginning to sprout in Shenzhen, one of China’s most advanced cities.

Evolution of the TOD concept 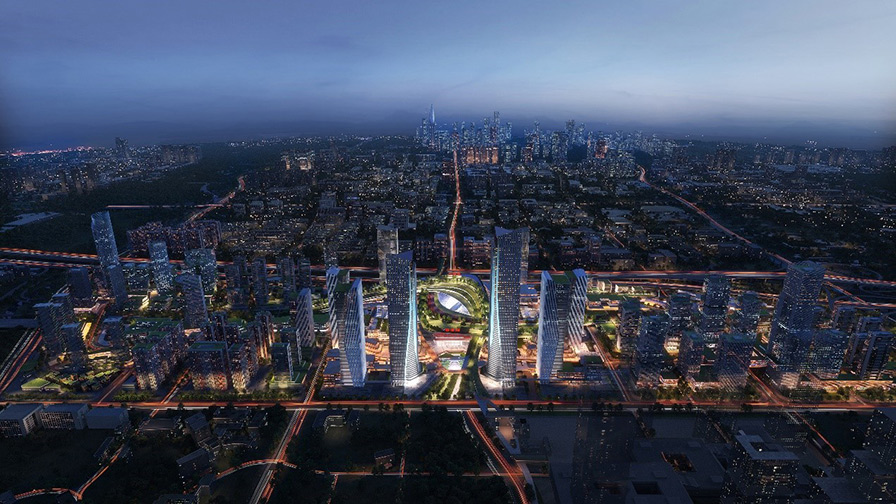 The Three Major Principles of the Xili Hub

Vision 01: A New Urban Land
“By eliminating and integrating station-city boundaries, further evolution of the ideal ‘station-area city’ will result.”

The project aims to induce urban regeneration and regional revitalization, based on the philosophy of TOD urban and rail line development. This, in turn, is premised on station-centered public transportation and the organic linking of stations, cities, people and nature, as well as the spread of “TOD effects” to surrounding municipalities.

Through floor area ratio transfers and the application of a joint development scheme, boundaries that separate the station from its neighborhood, as well as the divides between developers, will vanish, creating a more human-scale, next-generation hub where nature and technology harmoniously coexist.

This project also sets forth three major strategies: CONNECT, BLEND, and BALANCE, along with 17 design principles. It represents China’s first effort to coordinate both the national strategy to expand the high speed rail network and Shenzhen's goal of urban development through TODs, with the aim of realizing a “win-win” relationship. 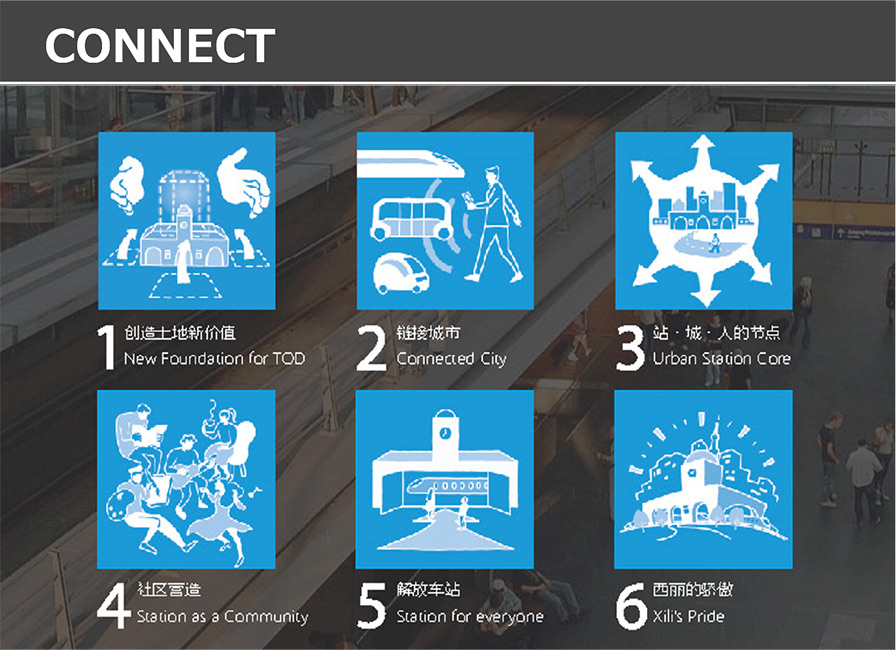 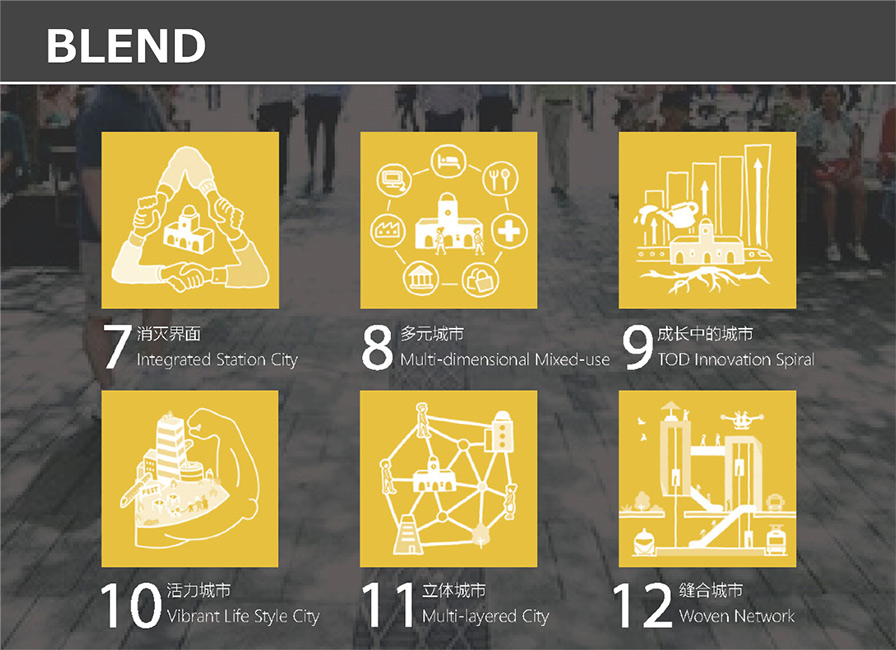 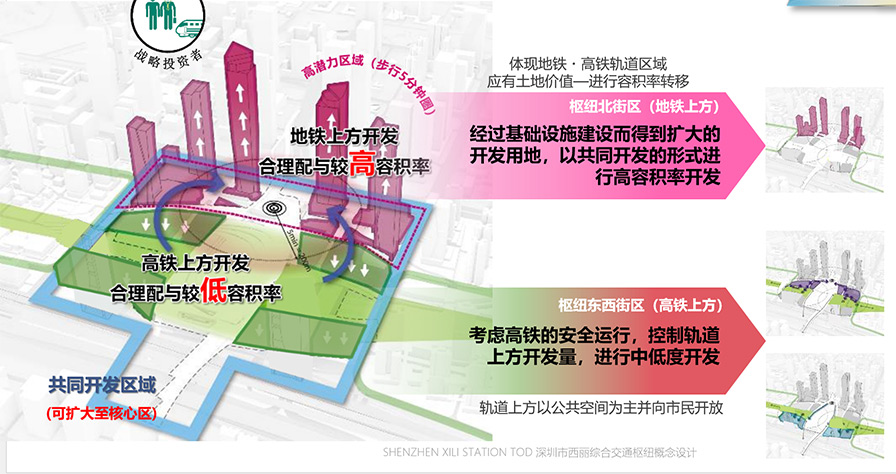 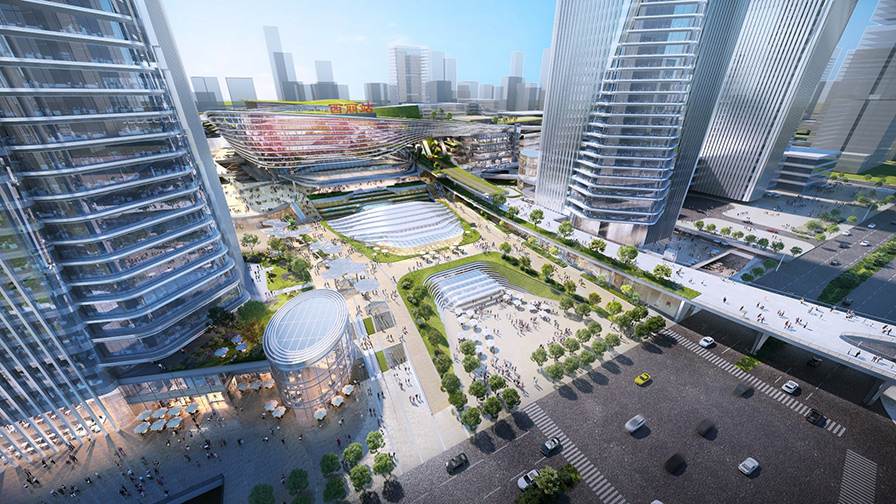 Comprehensive urban development through TOD will ensure the creation of a high-quality, sophisticated architectural space. It will also seamlessly extend the public area around a high speed rail station to the surrounding city. Through the efforts of a wide range of cooperating stakeholders, value is added to the entire community where developers, facility operators, managers, users, and citizens all benefit. 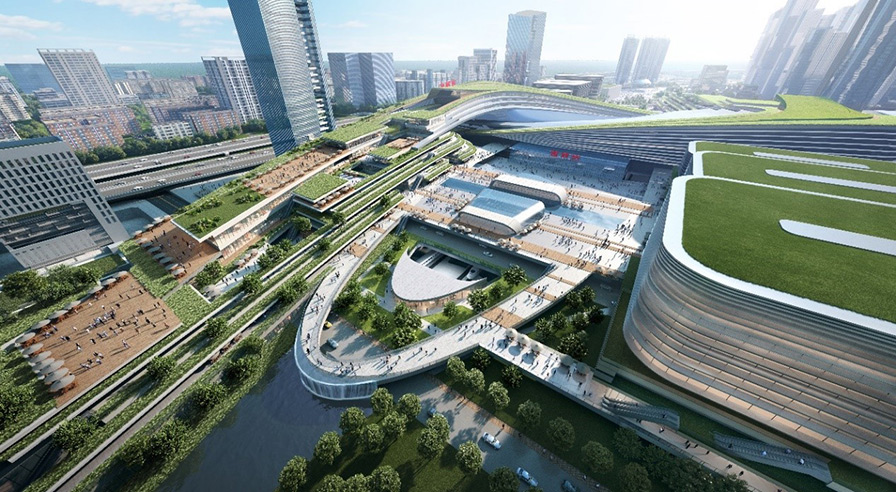 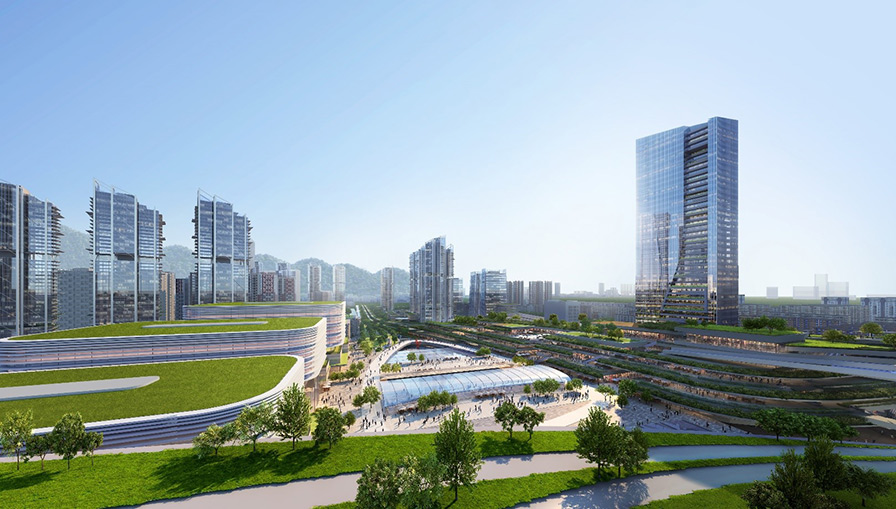 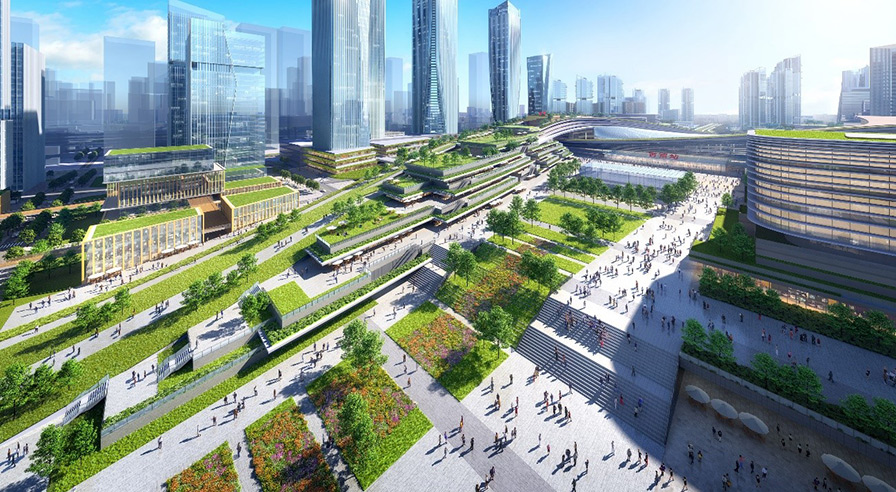 Vision 02: An Urban Sense of Arrival
“For long-distance passengers, a high-speed rail station in the center of the city is ideal. This will be realized with the Xili station.”

The hub is located in Shenzhen's Nanshan District, lies at the intersection of two urban landscape/industry development axes, and will serve as the most important integrated passenger transportation hub in the city. With 13 platforms, 25 tracks (including four high speed rail lines), the 2,200m x 700m site will be Shenzhen’s largest railroad station.

To the north of the station, two intercity railroad lines will intersect with four subway lines at multiple levels. In the future, the transit space on the north side of the station where short- and long-distance lines merge is expected to become Shenzhen's largest transportation hub, with an average daily passenger count of more than 1.3 million people.

The station's north plaza and the high speed rail trackside waiting room will be the most iconic hospitality space in Xili. Efficient, convenient traffic flow and rich natural scenery will be the “face” of Xili, welcoming passengers and imbuing them with a sense of arrival for an uplifting travel experience. 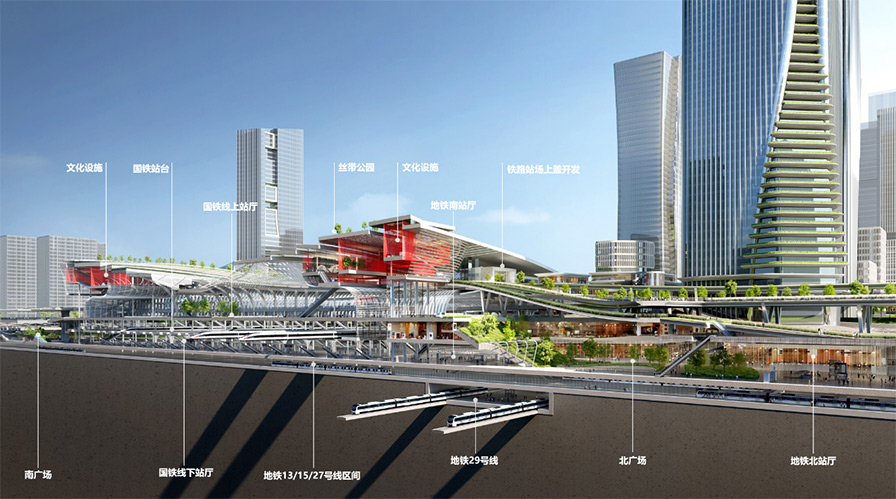 North-south cross-sectional view of the station 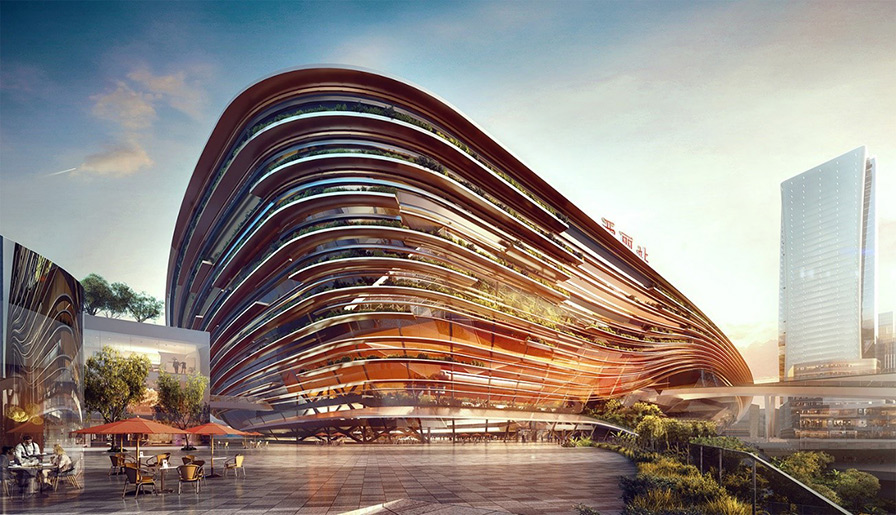 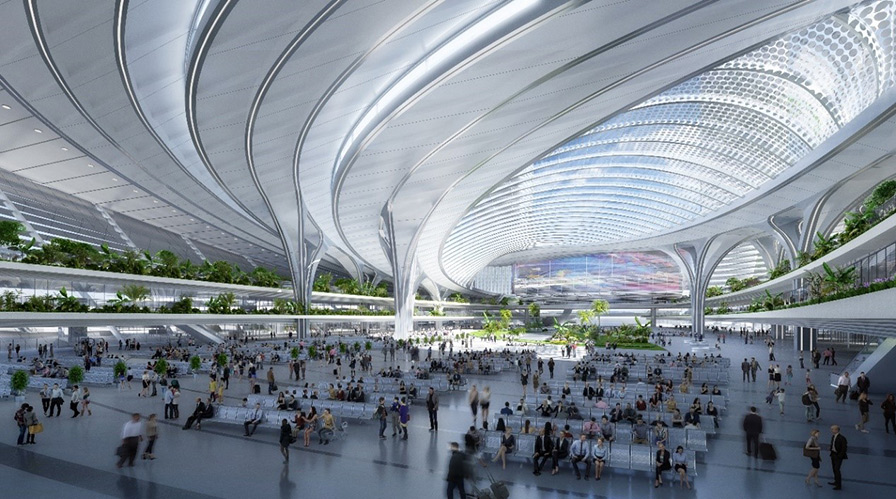 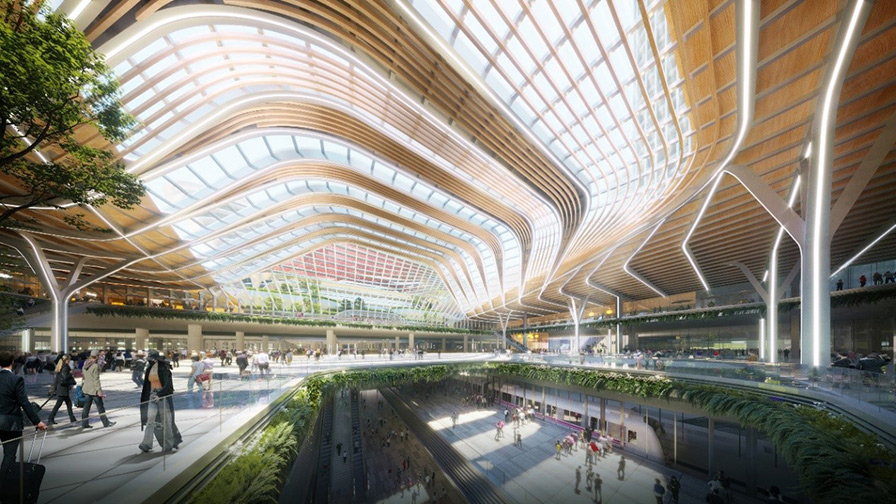 Passenger transfer area on the station’s north side 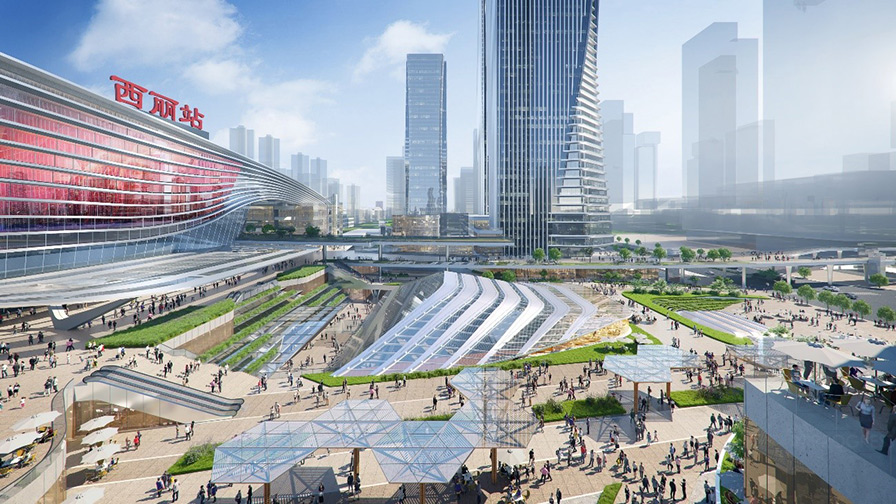 Vision 03: Station, Town, and the Integration of People & Nature
“This project aims to create a place that will serve as a gift (ribbon) to the people who live and toil every day in Shenzhen.”

The most distinctive feature of this project is the "Ribbon City" landscape concept that connects the top of the station building with the city on both sides.

“Ribbon City" is planned around three concepts: "New Urban Land," "A Sense of Arrival," and "Integrating Station, City, People and Nature.” Together with the river system and vegetation of Qianhai Bay and Dasha River, a “water and greenery cycle” surrounding the city will take shape. In order to avoid dividing the city with rails and railway-affiliated structures, a connecting pedestrian network will stretch above and below ground. Traffic lines and station spaces, which are connected like an urban ribbon, are integrated with the landscape and in consideration for the climate as well as the lifestyles of the citizenry. This will form an urban oasis and an organic network that connects north, south, east and west. 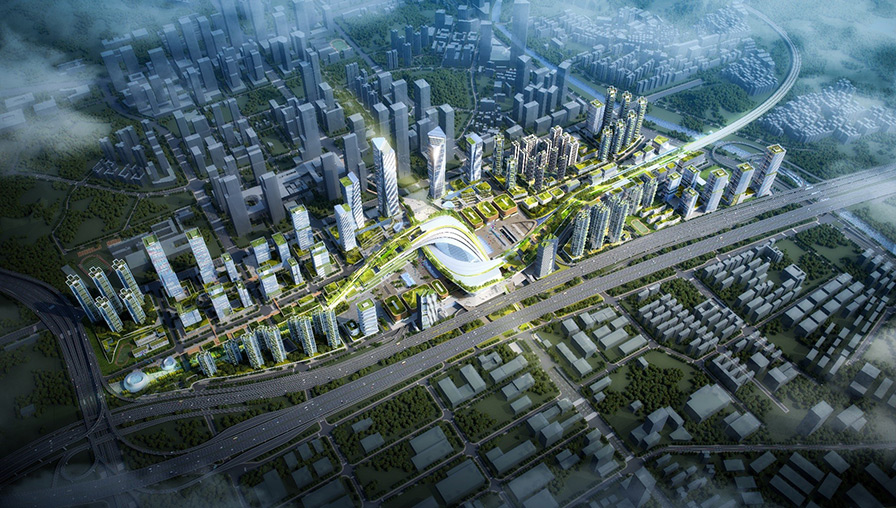 Bird's eye view of the station 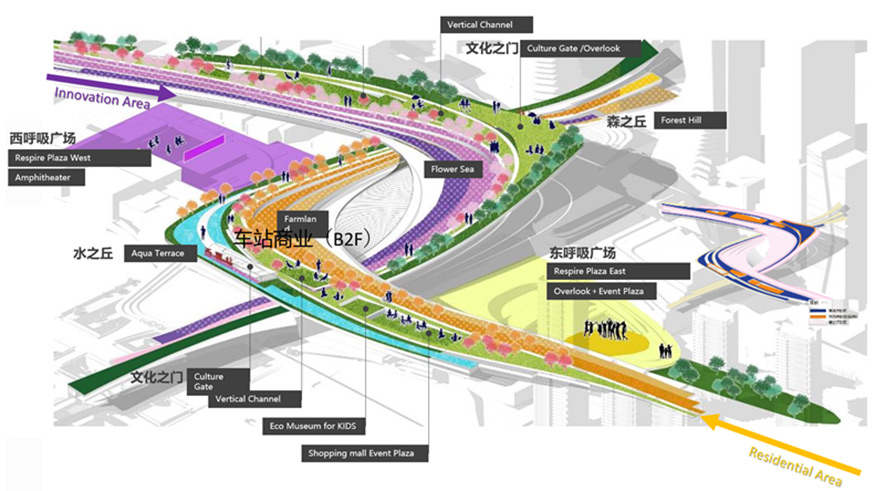 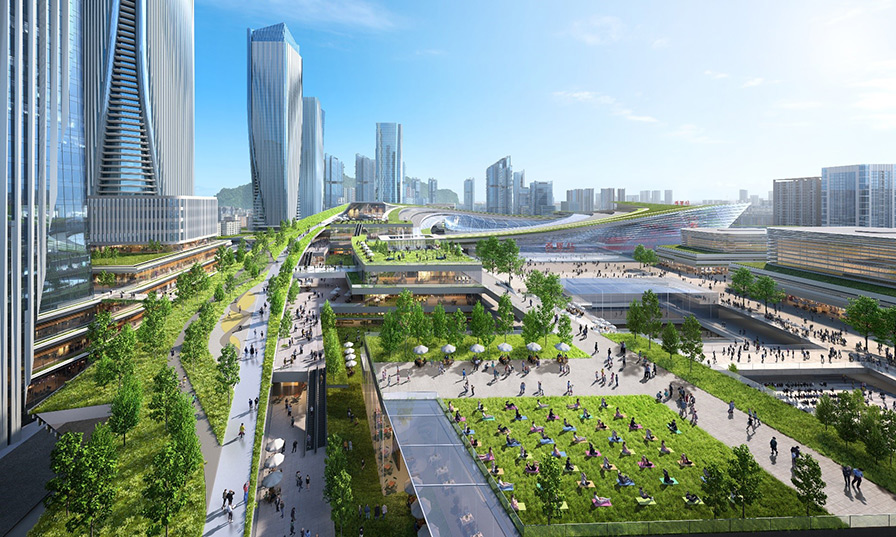 Ribbon City, west side of the station 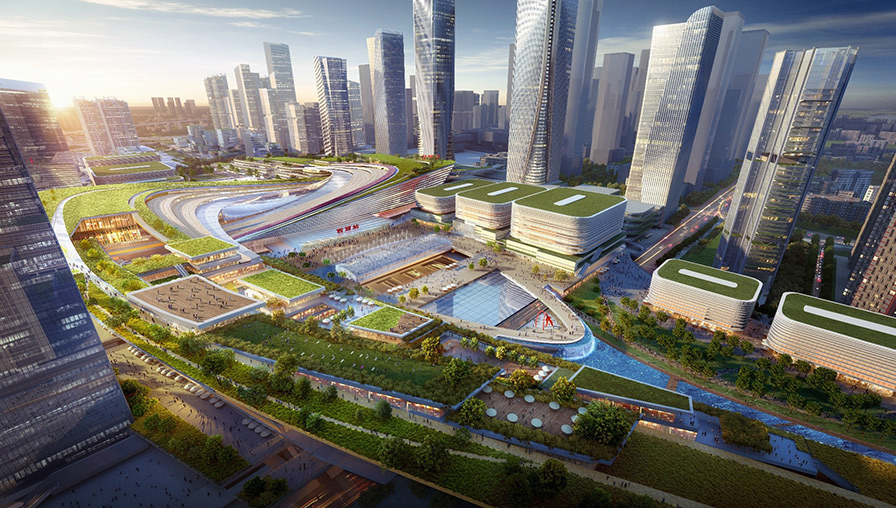 Ribbon City, east side of the station

“A new kind of station that coexists with the city, evolving with it. ～A wish for a green, low-carbon future city ~"

In planning this project, Nikken Sekkei has been in close communication with each of the companies in the JV consortium and project stakeholders. We will continue to work together to promote the project in order to realize next-generation TOD in Shenzhen.